In order to change the frequency of sounds, always need three things: A source of energy, a source of vibration, and a resonating chamber. This is true for all acoustic (non-electronic) instruments, including the human voice. The voice is fundamentally a wind instrument. The human vocal apparatus is like other kinds of musical instruments at once: a wind instrument and a string instrument. This apparatus includes a source of wind (the lungs), components that vibrate (the vocal cords in the larynx), and a series of resonant chambers (the pharynx, the mouth, and the nasal cavities). Here is how all these components work together when you speak. We use air to make sound, rather than vibrating strings or hitting objects to change the pitch.   The larynx produces the vibrations without which you would have no voice, it is these other parts of your vocal apparatus that make your voice so flexible and versatile.  Actually "cords" is not really a good name, because they are not string at all, but rather flexible stretchy material more like a stretched piece of balloon.

A water bottle and a paper tube make a membranophone—an instrument that produces sound from a vibrating stretched membrane. It is similar to catch a talking toy and put it in a bottle. 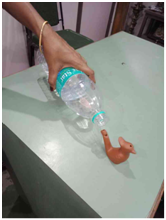 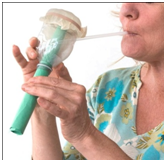 The finger holes can be opened along the length of the tube to increase the effective length, thereby in decreasing the frequency in puberphonia. 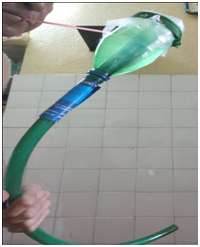 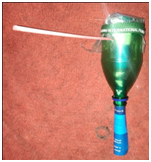 The term percussion instrument refers to the fact that most idiophones and membranophones are sounded by being struck, although other playing methods include rubbing, shaking, plucking, and scraping.

We provide membranophone to puberphonia boys for learning andrecognisingthe positive low pitch of vocal production. It is a positive learning process.  It is a active voicing, during novel voiced vocal production in puberphonia. Membranophone activation was successful  after few exposure, precluding that it developed out of training or conditioning. Indeed, within one hour of practice, individuals tailored their voice duration and frequency insomuch that showed major differences to the novel vocalizations from which they originally deprived.

Percussion is commonly referred to as "the backbone" or "the heartbeat" of a musical  instruments. Drumming releases endorphins, enkephalins and Alpha waves in the brain, which are associated with general feelings of well-being and euphoria. When drummers play with an open mouth or make a funny face, it's because they get lost in the music, and they feel it. Those are uncontrolled movements that one is not aware of doing, called movement coordination patterns or mannerisms. CHILDREN ESPECIALLY WITH ADD, ADHD and other challenges seem to be drawn to these drums and may benefit interacting with them under adult supervision to increase their creativity and motor skills. We are confident that puberphonia boys will love these or we will be happy to perform membraphone drumming. It work as an  ART.

Parai means 'to speak' or 'to tell'. A hollow drum made of a wooden ring, with cow skin stretched on one side and played with two unequal sticks, the percussion sticks used are two in number and named after the quality of the sound they generate. The thin slender percussion stick is called “sunddu kucchi” (high pitch) and the other thick relatively shorter stick is called “adi kucchi” (base note). In current times, Parai is considered a musical art to express freedom.

The sound of drumming generates new neuronal connections in all parts of the brain. The more connections that can be made within the brain, the more integrated our experiences become.  This leads to a deeper sense of self-awareness.

Drumming also appears to synchronize the lower areas of the brain (non-verbal) with the frontal cortex (language and reasoning). This integration produces feelings of insight and certainty.

For these reasons therapeutic drumming may be a powerful tool in helping retrain the brains of people who have some level of damage or impairment, such as with Attention Deficit Disorder (ADD), after a stroke, or where there is neurological disease such as Parkinson’s.

Finally, drumming can induce a natural “high” by increasing Alpha brain waves.  When the brain changes from Beta waves (concentration) to Alpha waves, you feel calm and relaxed.

As such, Alpha waves can also produce feelings of well-being and even euphoria, which may help people who suffer from mental illness, such as depression and anxiety.

This same Alpha activity is associated with meditation and other integrative modes of consciousness.

Drumming can have positive effects on your health and may help with many conditions from stress, fatigue, and anxiety, to hypertension, asthma, chronic pain, arthritis, mental illness, addiction, and even cancer.

Here’s why drumming is good for you:

1.Makes you happy. Participate in a drum circle or take a cardio drumming class and you will see how happy it makes you. Drumming releases endorphins, enkephalins and Alpha waves in the brain, which are associated with general feelings of well-being and euphoria.

2.        Induces deep relaxation. In one study, blood samples from participants who participated in an hour-long drumming session revealed a reversal in stress hormones.

3.        Helps control chronic pain. Drumming can certainly serve as a distraction from pain. And, it promotes the production of endorphins and endogenous opiates, which are the body’s own morphine-like painkillers.

4.        Boosts your immune system. Studies show that drumming circles boost the immune system. It has shown that group drumming actually increases natural T-cells, which help the body combat cancer as well as other viruses, including AIDS.

5.        Creates a sense of connectedness. Drumming circles and group drumming classes provide an opportunity for “synchronicity” in that you connect with your own spirit at a deeper level while also connecting with other like-minded people.

6.        Aligns your body and mind with the natural world. The Greek origin of the word “rhythm” is “to flow.” Drumming allows you to flow with the rhythms of life by simply feeling the beat.

7.        Provides a way to access a higher power. Drumming as a means to integrate mind, body and spirit. They focus on the whole body and then integrate the healing at both the physical and spiritual level by drumming, which connects spiritual forces.

8.       Releases negative feelings. The act of drumming can serve as a form of self-expression. Puberphonia  can literally drum out their feelings. When held, negative emotions can form energy blockages. The physical stimulation of hitting the drums can help remove those blockages. Drumming has even been used therapeutically to help addicts deal with their emotions.

9.        Puts puberphonia in the present moment. While drumming you are moving your awareness toward the flow of life. When you are flowing with the rhythm of life you cannot be caught up in your past or worrying about your future.

10.     Allows for personal transformation. Drumming stimulates creative expression. When one drum in a group, thay not only get to self-express, but  get feedback from the other drummers.  It’s the equivalent of talk therapy! Drum circles provide a means of exploring your inner self, and expanding your consciousness while being part of a community.

These two stretchy things are what vibrate. How much your vocal cords are stretched makes your voice higher and lower - the looser your vocal cords, the lower the sound, and the tighter, the higher. Then as the sound goes up into your mouth, the shape of your mouth (and the shape of your sinus cavities in your face and nose) change the sound even more, to create a wonderful flexible instrument capable of speech sounding.

Each musical instrument has both a vibrating mechanism and a resonating mechanism. The vibrating mechanism is the source of the sound waves, and the resonating mechanism refines, augments and amplifies those sound waves giving the instrument its unique tonal character. A few things that make the voice vastly different from every other instrument include the fact that the vocal folds can simultaneously be stretched, thickened or thinned, changing the nature of the actual source of the sound waves; in addition, the vocal tract of the human voice can change shape on a dime which enables to talk/ sing a huge amount of different vowel sounds, give their voice a seemingly unlimited number of colors, and also adding the dimension of language to the instrument. The fact that the human voice is vastly more complex than any man made instrument gives speakers a lot of options, but this complexity also makes it an instrument that is extremely difficult to “play.”

Wind instruments usually have a reed that you blow across, a mouthpiece that you blow against with the lips, or a mouthpiece that you blow over and across. A wind instrument needs…..wind..as in breath being blown into it. Pitch is controlled by using a sometimes complicated fingering system (think clarinet or flute) using, many times, all 10 fingers, to lengthen and shorten the inside of the instrument’s air column to produce notes. The exception to this is the slide trombone which physically makes the wind column longer and shorter. String use strings….wind instruments use wind. Every note has its own fundamental frequency. In string instruments, you control the frequency by putting your finger on a fret usually. In wind instruments, you control the frequency by which holes you cover

There are multiple theories behind the origin of Sa-Re-Ga-Ma-Pa-Da-Ni. They're believed to be originated from the sounds of animals with each of the 7 swaras corresponding to the 7 chakras of the body.
Sa - Shadyamam - Originator of the 6 swaras. Shadya means 6. This is the most basic sound that requires minimum effort, a  Peacock sound. The sound of the peacock is called 'Agaval'. We call the 'peacock' a sweet sound that the male peacock makes when it even seeks its mate. Similarly, when a benefactor mingled with the Lord, they named it 'Agaval' to express their blissful bliss / state through Tamil songs.
Re - Rishabham - As powerful as a bull
Ga - Gandharam - Melancholic,Goat
Ma - Madhyamam - The middle swara,Heron
Pa - Panchamam - The fifth swara, Koel
Da - Daivatham - Sensitive, Horse
Ni - Nishadam - That closes. Since this is the last swara. Elephent

The Science Behind it . .

We follow the wind instruments music guideline. In a wind musical instrument a column of air enclosed in a wooden tube on metal tube vibrates and produces  speech sound.  Air is blown vibrating the air down the tube of the instrument to produce sounds. Different notes are produced by covering or opening holes in the instrument tube. Changing the reed, and size of the instrument tube will not change the frequency. Vocal folds vibrate when excited by aerodynamic phenomena; they are not plucked like a guitar string.

When you speak, air rushes from your lungs and makes your vocal cords vibrate, producing the sound of your voice. If you've ever plucked a small, thin rubber band, you've heard the high-pitched twang it makes when it's stretched. A thicker rubber band makes a deeper, lower-pitched twang. It's the same sort of thing with vocal cords.  As your body adjusts to this changing equipment, your voice may "crack" or "break."