Nasopharynx is considered as the dark area of otorhinolaryngology practice,

More recently, two developments has enhanced our undertanding of the anatomy of the eustachian tube: Valsalva computerized tomography and endoscopic ear surgery.

1.    Given the greater access to the ear anatomy using endoscopic methods, it has been suggested that the bony part of the eustachian tube is really the anterior extension of the middle ear cavity, or the "Protympanum". The term "Eustachian Tube" should be limited to the fibrocartilaginous structure connecting the protympanum to the nasopharynx.[4]

3.     Possible functions of the guttural pouches include pressure equilibration across the tympanic membrane, contribution to air warming, a resonating chamber for vocalization, and a flotation device.

5.     Eustachian opening is one another door for the body. The other nine doors are, two eyes, two ears, two nostrils, mouth, anus and genital. Anus and genital are not door, but a orifice with one way traffic. How can it be a door?

Yarning and snoring produce low pitch voice. Yawning produce low pitch sound. Yawning also helps open the Eustachian tube or opened Eustachian tube resonate the sound. ,Yawning, which is by far the most popular approach to teaching an open throat, tends to produce an overly open pharyngeal space, and thus a hollow, 'throaty' tone.  We fond of some of the methods of creating an open throat space, particularly those involving imagery or shaping of the vocal tract that encourages the distortion of vowels. For instance It also tends to be accompanied by a flattening or retracting of the tongue. Whenever a teacher instructs a student to yawn in order to 'open the throat', he or she overlooks the injurious ramifications of such a technique when it is applied to the tasks of puberphonia speech training. 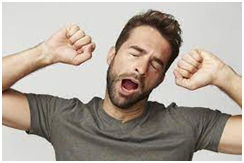 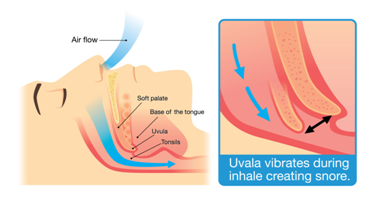 If the puberphonia speech training boys reaches the point where he or she really feels a hugely open space in the throat - the feeling that he or she is 'swallowing an egg' or some other piece of fruit, for example - it is actually likely that the tongue root is so out of the way of the mouth cavity that it is depressing the larynx. What is an effort to free up space for the voice to resonate better actually ends up placing tension on the throat, tightening it, and producing a hollow, throaty timbre.

Raising the eyebrows, furrowing the brow, creasing the forehead, flaring the nostrils or widening the eyes are linked to the lifting of the soft palate to enhanced resonance balancing.

We taught them to 'inhale' a soft, quiet 'k' sound. (This is kind of like the imagery of 'drinking in the breath' or 'inhaling the breath'.) This technique lifts the soft palate further, separating it from the tongue, and lowers the larynx during inhalation. It is one helpful technique for ensuring that the resonating spaces are open. The soft palate's motion during breathing is responsible for the sound of snoring. Touching the soft palate evokes a strong gag reflex in most people. The soft palate retracts and elevates during speech to separate the oral cavity (mouth) from the nasal cavity in order to produce oral speech sounds. If this separation is incomplete, air escapes through the nose, causing the speech to be perceived as hyper nasally. In the case of nasal consonants and vowels, it lowers to allow the velopharyngeal port to open. Velopharyngeal closure (VPC) is an important part of speech. All phonemes in the English language, with the exception of the three nasal phonemes (/m/, /n/, /ng/), are produced with oral airflow, meaning that the velopharynx should be closed. The nasal phonemes are produced with nasal resonance, meaning that the velopharynx must open during their production. a possible role for the velum in influencing Eustachian tube functioning because the tensor muscles of the velum pull the membranous lateral wall of the Eustachian tube away from the stationary cartilaginous medial wall, thereby opening the normally closed tube.

In the equids (horses) and some rodent-like species such as the desert hyrax, an evagination of the Eustachian tube is known as the guttural pouch. The guttural pouches are paired out  pocketing of the upper airway (pharynx). Among the amphibians, the frogs and toads are capable of producing the most distinctive and greatest variety of calls. Even though the female frogs and toads are able to call, they do so infrequently. The males do most of the calling, and the majority of the singing is done at the breeding sites, because the main purpose of the call is to attract a mate. However, a different call may be used to stake out a territory, the frog or toad announcing his presence and in effect warning others away. The call is produced in much the same manner as other animals produce sound—vocal chords vibrate as air passes over them. Unique to the frogs and toads, however, is the inflatable vocal sac possessed by most of them There can be one or two vocal sacs, depending on species. 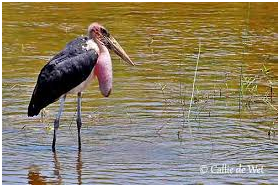 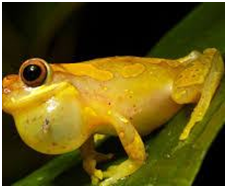 Guttural pouch are sacs of air that expand from the eustachian tube. Frog produces a low guttural, reverberant sound.

The sac is an effective resonator, like a sounding board on a stringed instrument. The sac itself, however, is not able to amplify the level of the call. As the air is expelled over the vocal chords and the call is completed, the sac deflates. It often is seen as an area of wrinkles or folded skin on the throat or shoulders of some species.

The calls produced by the various toads and frogs range from simple clicks to whistle- or bell-like sounds to a full, resonating deep croak.

Whether the vibration happens while the source is moving, or not, does not depend at what speed the sound is going to travel through air. However, the pitch of sound will change depending upon which direction you listen in. Speed of sound is not a constant in context of relativity. Example: On a rainy day go fast in the rain, you will be more drenched. Low pitch echoes longer than higher pitch, and often the lowest harmonic of an acoustic instrument is obscured by the fundamental pitch. ... Lower air speed might be responsible for the lower-pitched echo/reverberations that seem to follow the main part of the note.

Zeus loved consorting with beautiful nymphs and often visited them on Earth. Eventually, Zeus's wife, Hera, became suspicious, and came from Mount Olympus in an attempt to catch Zeus with the nymphs. Echo, by trying to protect Zeus (as he had ordered her to do), endured Hera's wrath, and Hera made her only able to speak the last words spoken to her.

Zeus was the highest ranking God       Echo, a mountain nymph 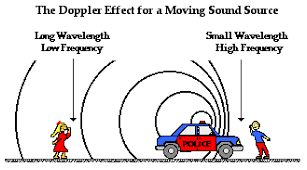 Additionally, yawning and swallowing causes contraction of the muscles connected to the Eustachian tube, enabling the tube to open to small amounts of air. This allows for the equalization of pressure between the middle ear and atmospheric pressure and results in a “popping” sound in the ear. The “popping” sound results from small amounts of air entering the middle ear to balance the pressure differential with the environment. Popping is centered around the technique of popping, which means to quickly contract and relax muscles to create a jerking effect (a pop or hit) in the body. ( imitates characters being animated by stop motion- Roboting gained fame after Michael Jackson used the dance )

Patulous ET can cause autophony of one’s own voice and breathing sounds and aural fullness.  The eustachian tube helps to equalize the pressure in the middle ear. Having the same pressure allows for the proper transfer of sound waves.

Embryology of the Eustachian Tube

Although much advancement has been made in understanding the physics of phonation, some misconceptions still exist in textbooks in otolaryngology and speech pathology. For example, the Bernoulli effect, which has been shown to play a minor role in phonation, is still considered an important factor in initiating and sustaining phonation in many textbooks and reviews. Tension and stiffness are often used interchangeably despite that they have different physical meanings. The role of the thyroarytenoid muscle in regulating medial compression of the membranous vocal folds is often understated. On the other hand, research on voice production often focuses on the glottal flow and vocal fold vibration, but can benefit from a broader consideration of the acoustics of the produced voice and their implications for voice communication. However, because of lack of data of the mechanical properties in each vocal fold layer and how they vary at different conditions of laryngeal muscle activation; a definite understanding of the functional roles of each vocal fold layer is still missing.